Born in Antwerp in 1929, Jacques Zimmermann moved quickly with his family to Brussels. It was there that he discovered the Flemish and Dutch landscapers. He began his studies as a draughtsman at the Institut Saint-Luc in Brussels.

After the war, in 1951, he began to exhibit at Philippe-Edouard Toussaint’s Saint-Laurent bookstore-gallery, where many young innovative artists meet (Léopold Plomteux, Jo Delahaut, Jean Milo, Camiel Van Breedaem, Jacques Lacomblez, Marie Carlier, etc.), until he responds to a small announcement for a tour of puppeteers in the Belgian Congo where his wife will accompany him. He then became a theatre designer and puppeteer.

This one-year stay in Africa (1955 – 1956) will mark the work of Jacques Zimmermann, less by the encounter with African art than by the exuberant nature that he discovers during the tour, and which will remain a recurring source of inspiration («Jacques Zimmermann», Éditions Syllepse).

In 1957, he joined the “Phases” movement, founded in Paris by Edouard Jaguer in 1952 – 1953, which adopted the ethics of surrealism. From the beginning, Zim’s artistic work was nourished by the magical realism of Chirico’s perpectives.

From 1956 to 1994, he was appointed professor of composition in drawing at the Institut of Saint-Luc in Brussels.

During the 1960s and 1970s, he led a triple career as a painter, teacher of drawing and puppeteer. The weight of this triple activity is one of the reasons for the almost total interruption of his career as a painter between 1974 and 1979.

It is however at this moment that abstraction gives way to a dreamlike figuration where ambiguous beings dominate, barely trimmed from their abstract soil, half-insects, half-theatrical characters. Next to the painted works are works with felt tips, large black and white drawings in which Jacques Zimmermann integrates the influence of Albrecht Dürer’s drawings.

In the 1980s, he exhibited mainly at the International Art Gallery in Lasnes. In 1990, he participated in the exhibition «Phases -Belgique», in Mons, alongside the former collaborators of the magazine Edda.

His career as a painter gradually took over, as his career as a puppeteer came to an end, and then, in 1994, as a teacher. Jacques Zimmermann also creates wood and metal assemblies, strongly inspired by African art of which he is a great collector. His painting blends admirably with this type of art.

In 1996, a retrospective of his work was organized at the Schaerbeek municipal house (Jacques Zimmermann, Itinéraires, Catalogue d’exposition).

In 2001, he was elected Member of the Royal Academy of Fine Art of Belgium.

He likes to explore a powerfully dreamlike world that is situated at the crossroads of invented forms and imaginary landscape. His paintings are composed of plant and mineral sensations, sometimes bathed by a glowing sun or the cold glows of the northern lights.
Today, more than 90 years old, Zim continues to paint! 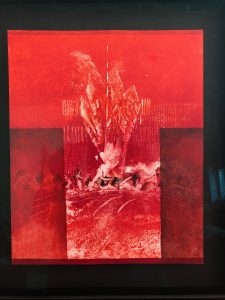